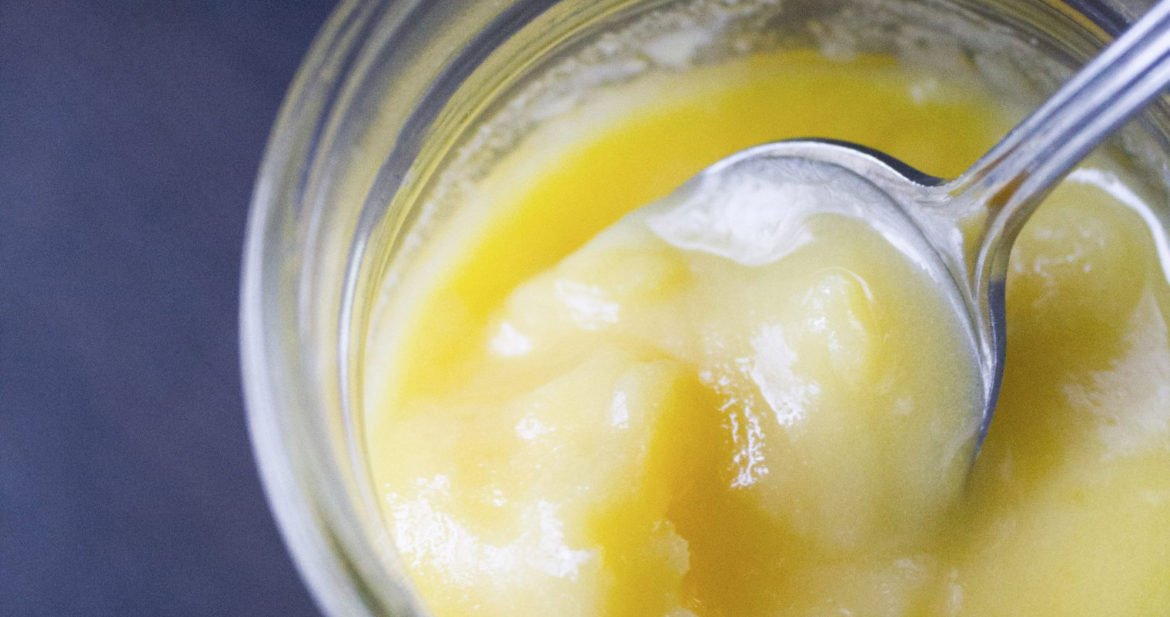 This D.I.Y. Ghee is so quick and easy to make. All you need is some grass-fed butter, basic kitchen materials and an hour. 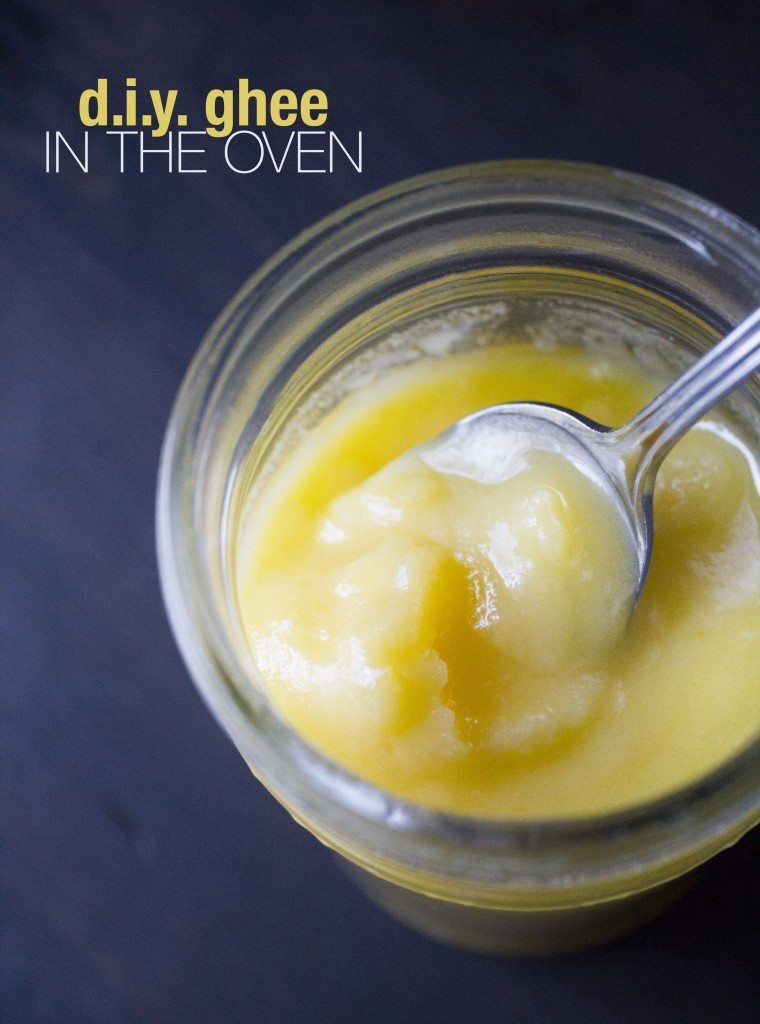 Although it has a funny name, ghee is essentially clarified butter which has been cooked a little longer giving it a delicious nutty flavor. It has been used in traditional Indian cuisine for centuries and is made by heating butter or milk until all the water is burned off and milk solids have separated from the butter fat. The milk solids are strained out and the end product is pure butter fat/oil which is has a longer shelf life and will last several months at room temperature or in the refrigerator. It adds lots of flavor to foods and since it has a higher smoking point, it’s also great to cook with. Because the casein and milk proteins have been removed, it’s also easier to digest and can sometimes even be tolerated by those with a lactose intolerance. Like extra virgin olive oil and coconut oil, ghee is a healthy fat and is even approved for the Whole30 program and by many people who follow a paleo diet.

If you find it in the stores, it can be a little costly. Making your own is so easy though and can be made in less than an hour!

The first thing you need is a good quality, grass-fed butter. This is the brand I used. I also prefer to get the unsalted version. I made this ghee with one pound of butter. If you buy this brand it usually comes in 8 ounce blocks, which equals two regular sticks. Two of these blocks would equal 16 ounces or 1 pound. You can make more, but you’ll have to bake it for longer. 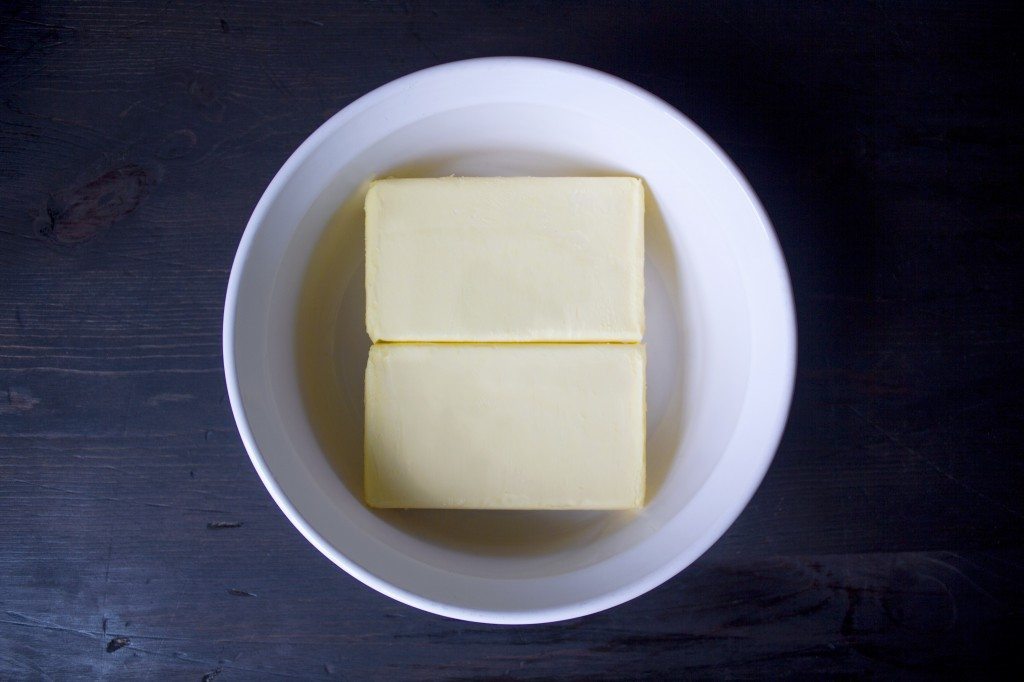 Preheat your oven to 275 degrees Fahrenheit. Put your butter in an oven safe dish and bake for 30-40 minutes, depending on your oven. Cutting it into chunks helps it to melt faster, so you can do it if you’d like. Start checking on it after about 20-25 minutes. By this time the butter should be melted and bubbly. You may see the milk solids settling to the bottom. Let it continue to cook and check on it every five minutes or so. When it gets to be golden yellow and some of the milk proteins have begun to turn brown, it’s done! 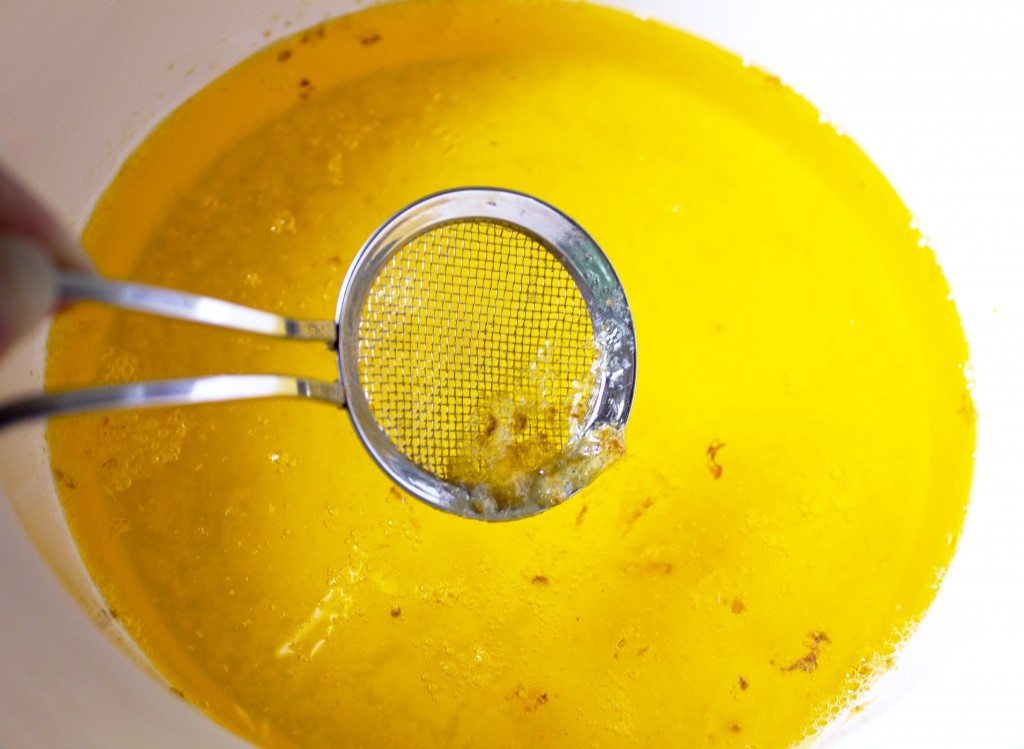 I take it out as soon any little brown appears while it’s still a light golden color. Many like to leave it for longer until it gets to be a darker amber color because they like the richer taste it provides. At this point, it’s all about preference. Just be sure to take it out before it burns. That would be bad!

When you remove it from the oven, gently scrape the film and milk proteins from the top of the oil and discard. Don’t be tempted to stir it up. You want the milk and oil to be separated. 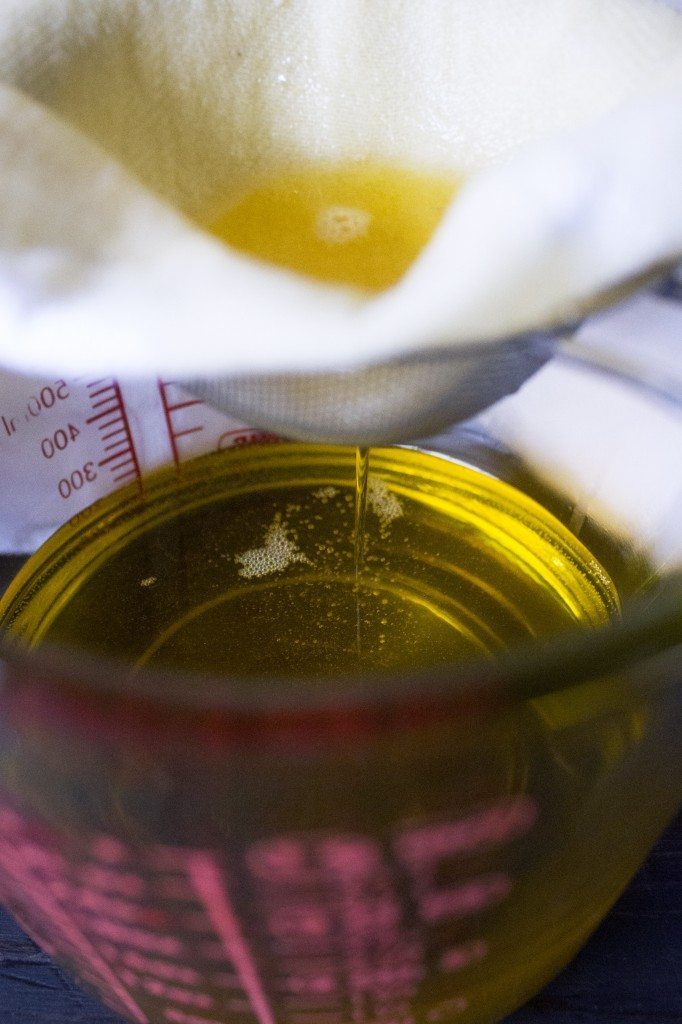 Place a clean kitchen towel or several layers of cheesecloth inside of a funnel or sieve to strain the ghee. Carefully pour the ghee through the funnel/sieve filter and into a clean glass container, one that’s tempered so that it won’t shatter with warm liquid! 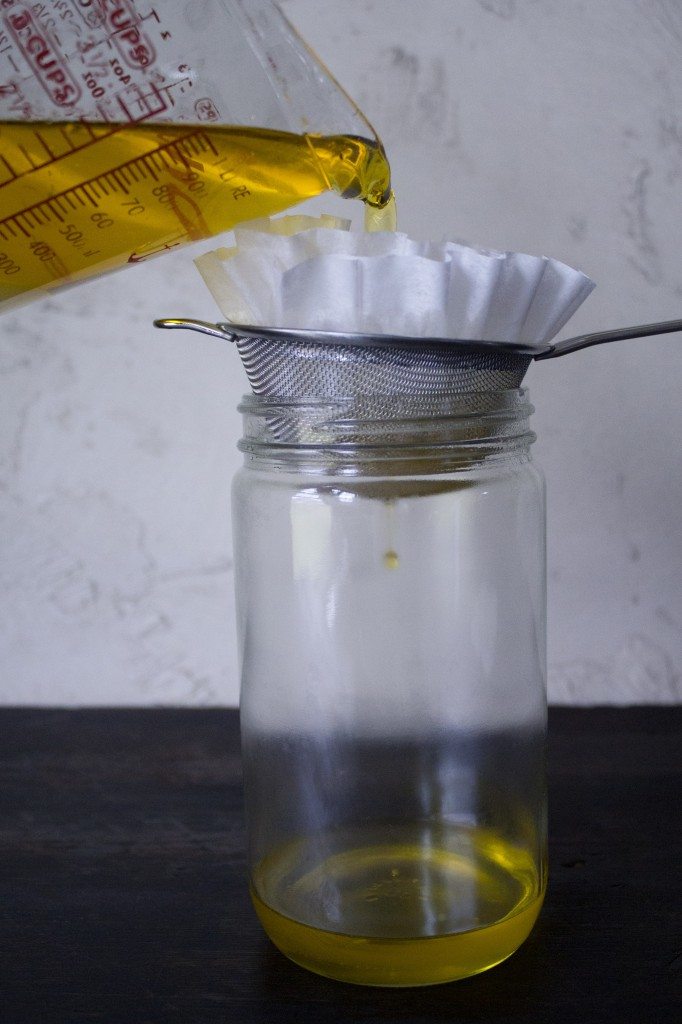 I filtered it twice, the second time I used coffee filters which I found weren’t as quick to strain through as using a towel was. It took a while to wait for the oil to filter through, but it caught all the the proteins that may have seeped through the first time. 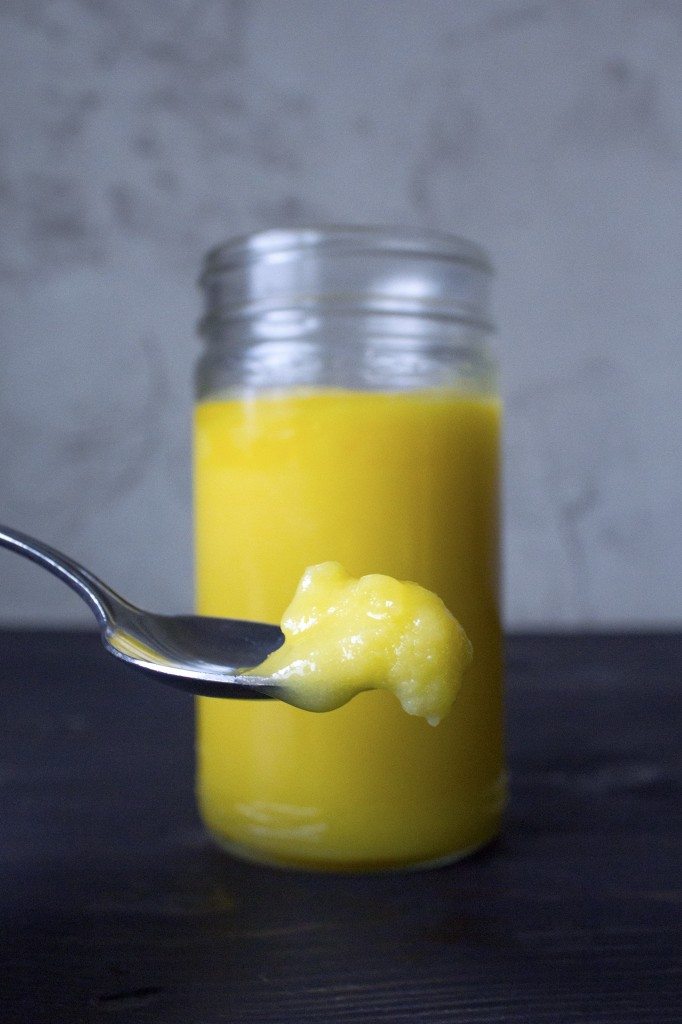 After it cools to room temperature it will be semi-solid, almost like coconut oil. If refrigerated it will turn completely solid. I like to keep mine in the refrigerator, but as long as all the water and dairy have been removed, it’s technically shelf-stable and can stay at room temperature in a sealed jar for several months, at least. Just be sure to use a clean spoon each time to remove the ghee so you don’t contaminate the jar.

Now that you have your homemade ghee ready, what are you going to do with it? Here are some suggestions:

How do you use ghee?