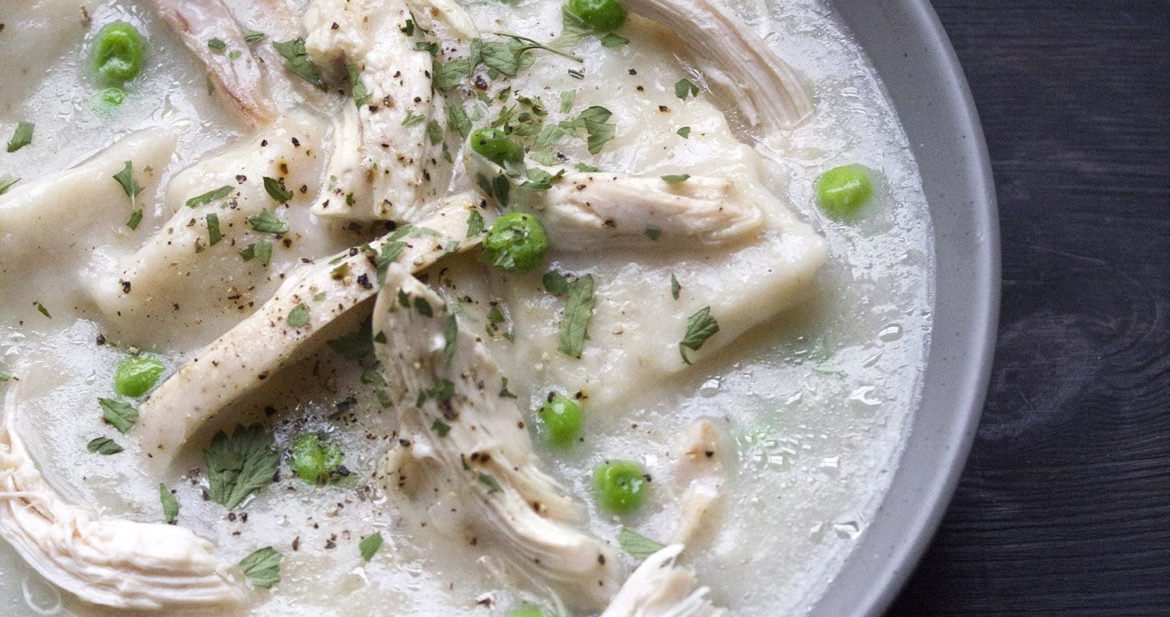 Southern style homemade gluten-free chicken and dumplings made with a homemade chicken stock is such a delish recipe! 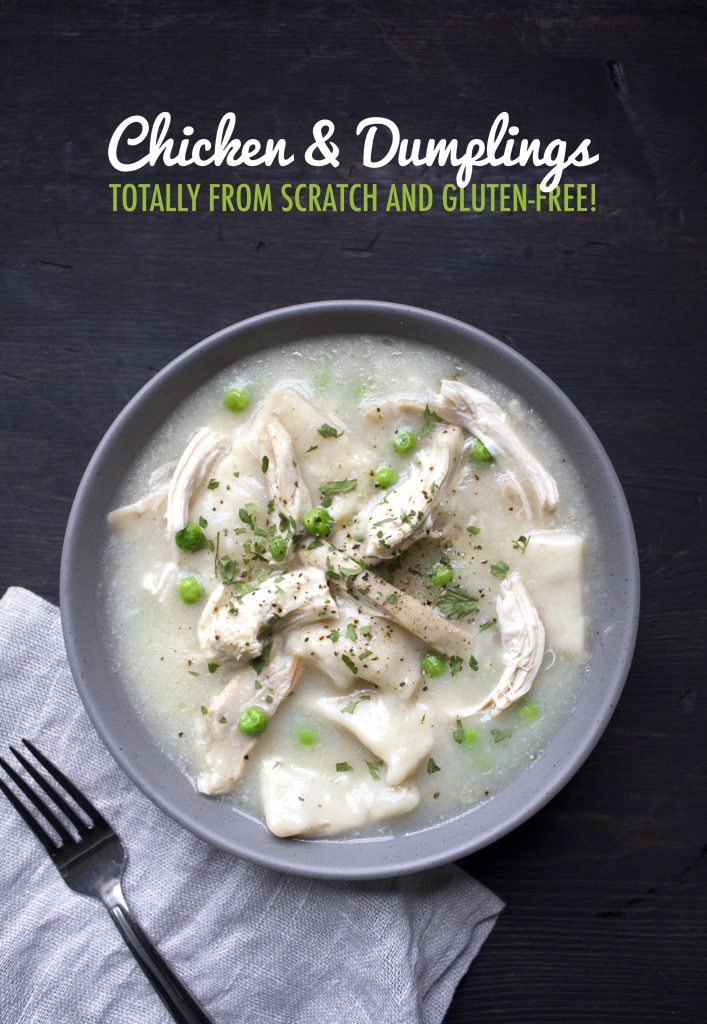 One of my absolute favorite comfort foods is chicken and dumplings. I’ve also heard people call it chicken and pastry, but whatever name you call it by, if you’re referring to a dish consisting of pieces of dough boiled in a savory chicken broth with tender chunks of chicken, we’re probably talking about the same thing. It’s a dish I could eat any day of the week, any time of the year. It brings back happy childhood memories of my grandma busy cooking in the kitchen. Classic comfort food made even better with a homemade broth and from-scratch dumplings! 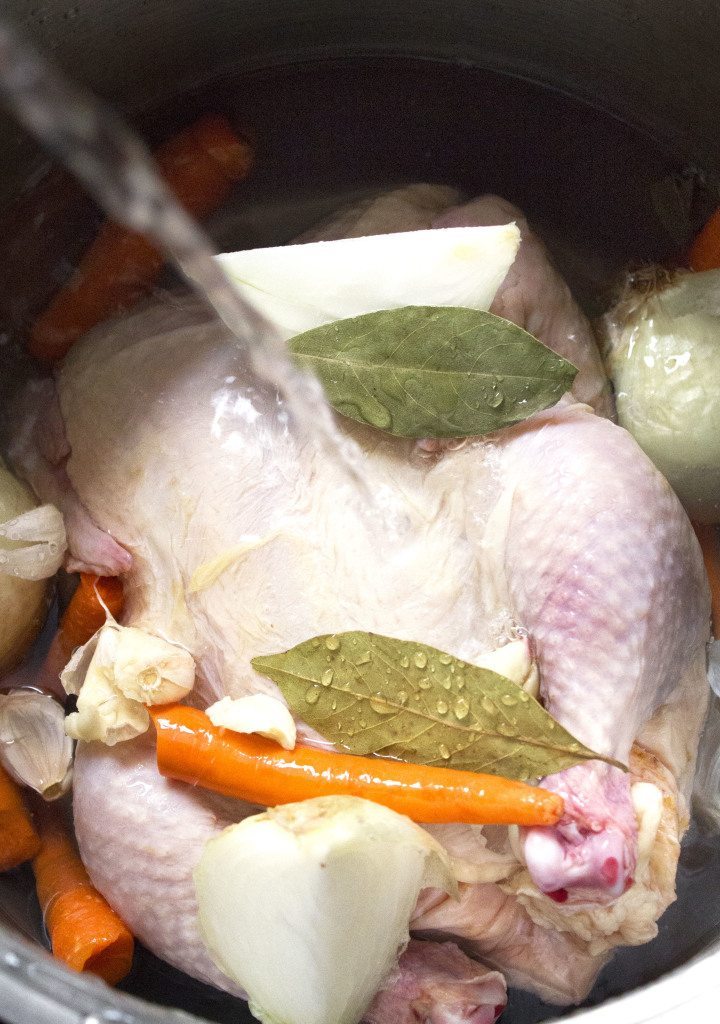 Whenever I make a stew or soup with a chicken broth base, I typically make my own stock by boiling a whole chicken with vegetables and herbs, for flavor. You can use any chicken pieces you prefer, as long as it’s bone-in chicken. The bones give the flavor. Along with the chicken, I toss in a few carrots, crushed garlic cloves, a whole onion, quartered, and some bay leaves. Don’t bother peeling the veggies because they will be discarded at the end anyway. 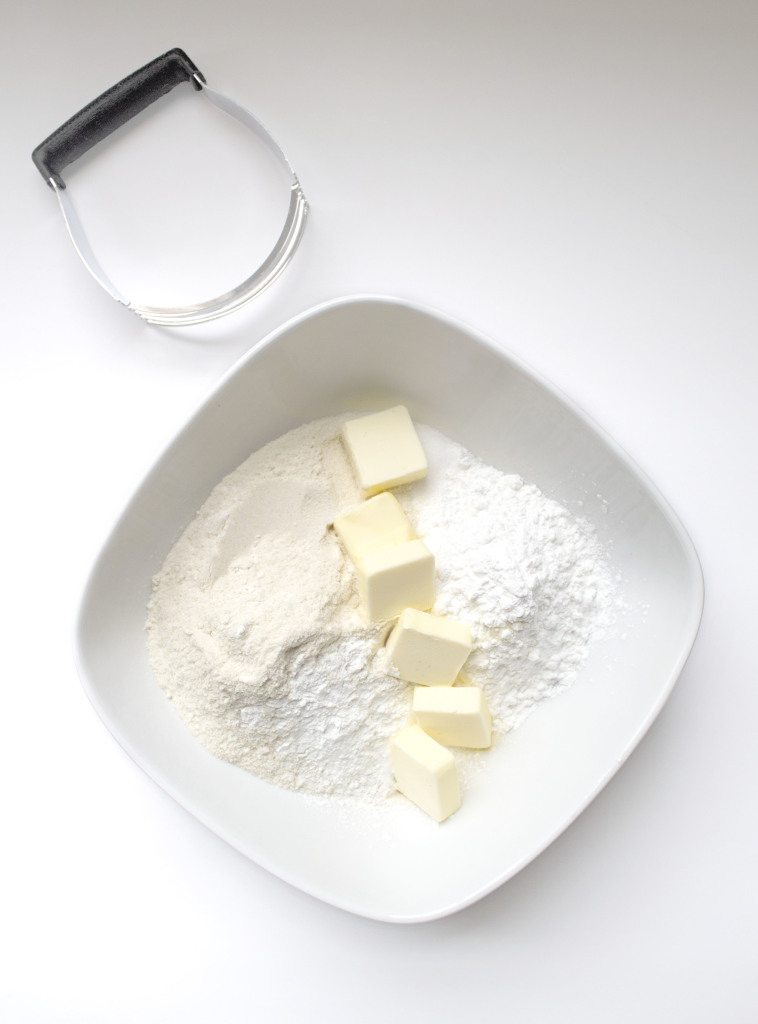 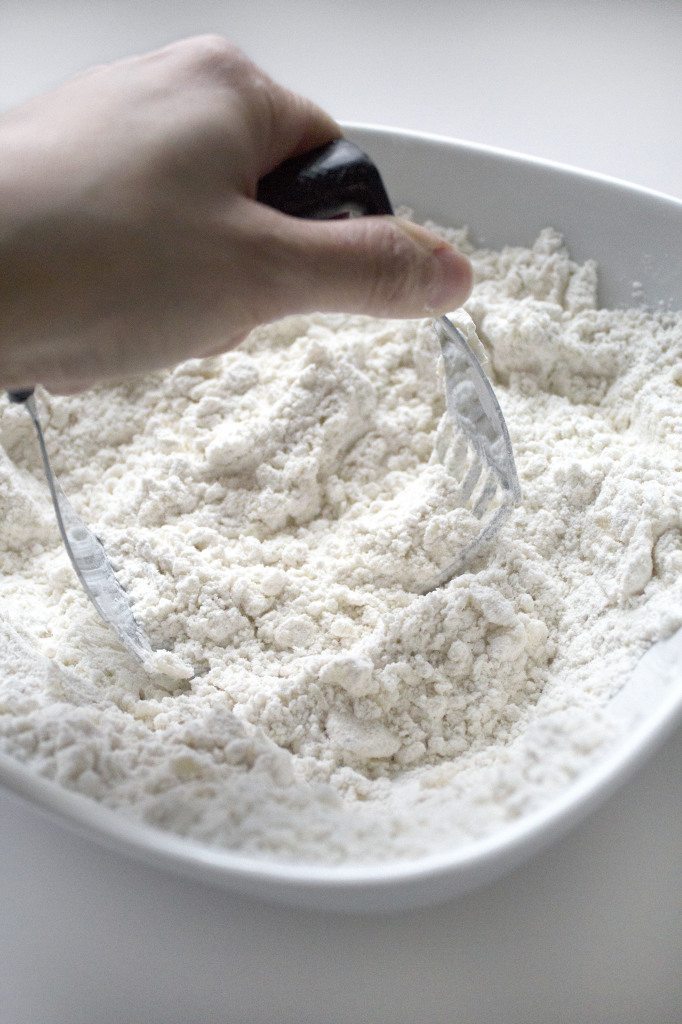 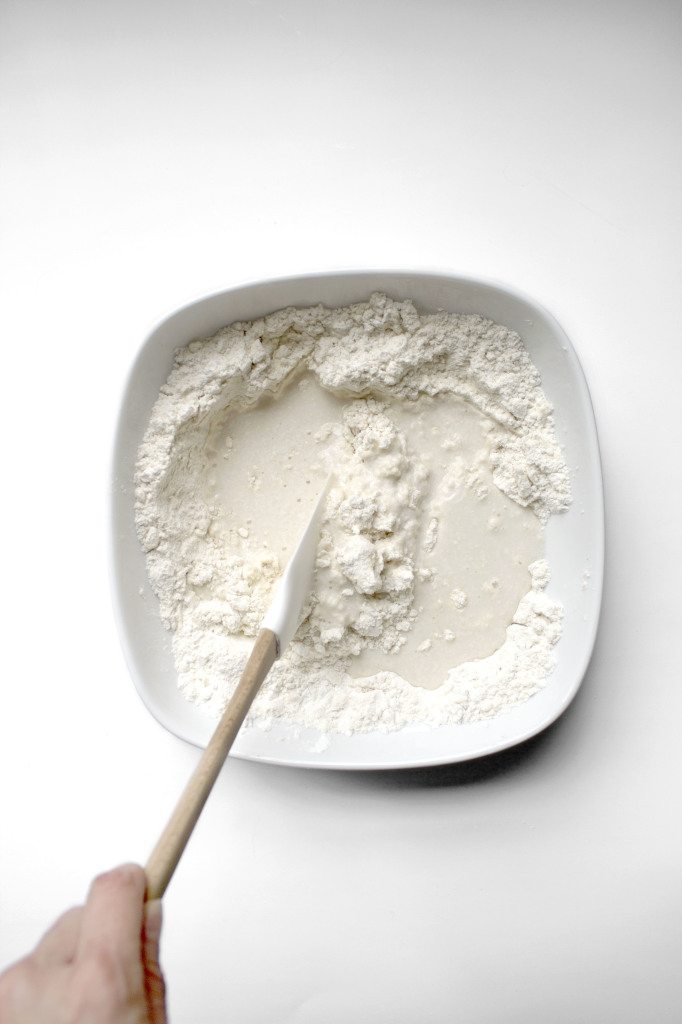 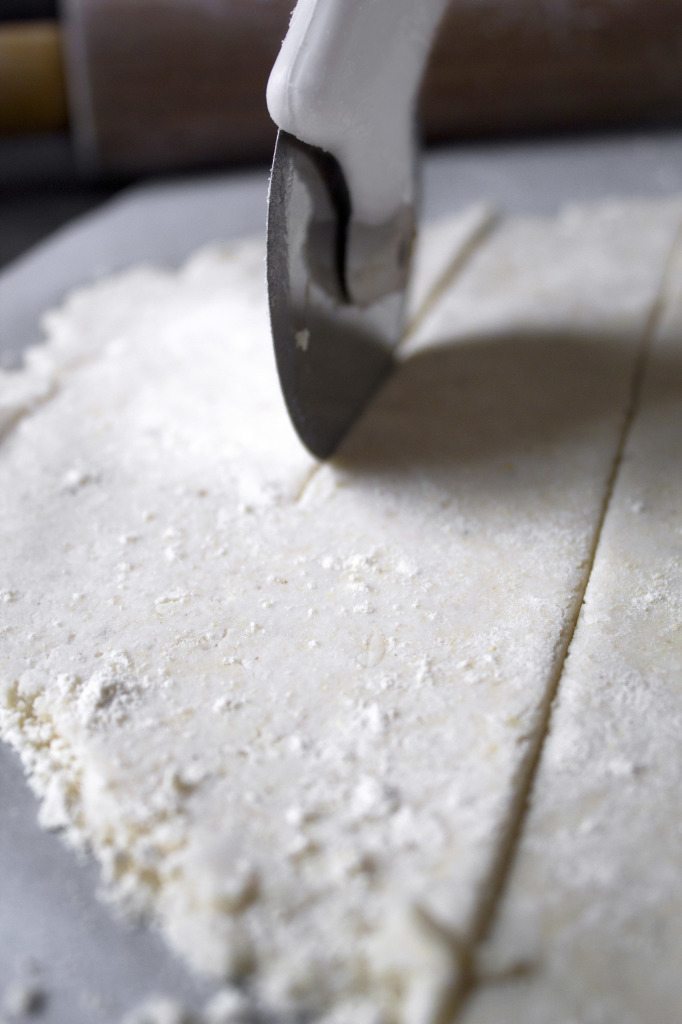 To make the dumplings, combine all the dry ingredients in a bowl and cut in the butter, until the butter is well incorporated into the flour and the mixture is coarse and crumbly. Stir in the milk and mix until it forms a dough. Roll the dough out onto a lightly floured surface until its about 1/4-thick. Use a knife or a pizza cutter to cut the dough into strips or squares, however you like your dumplings. The dumplings are seriously my favorite part of this dish! Mmmm.. 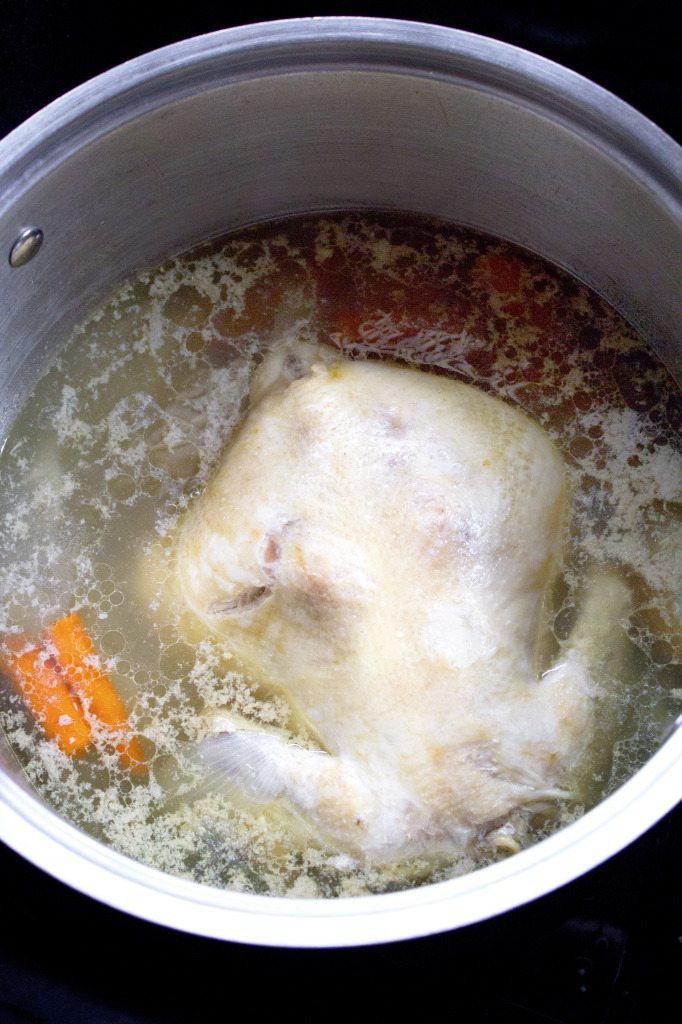 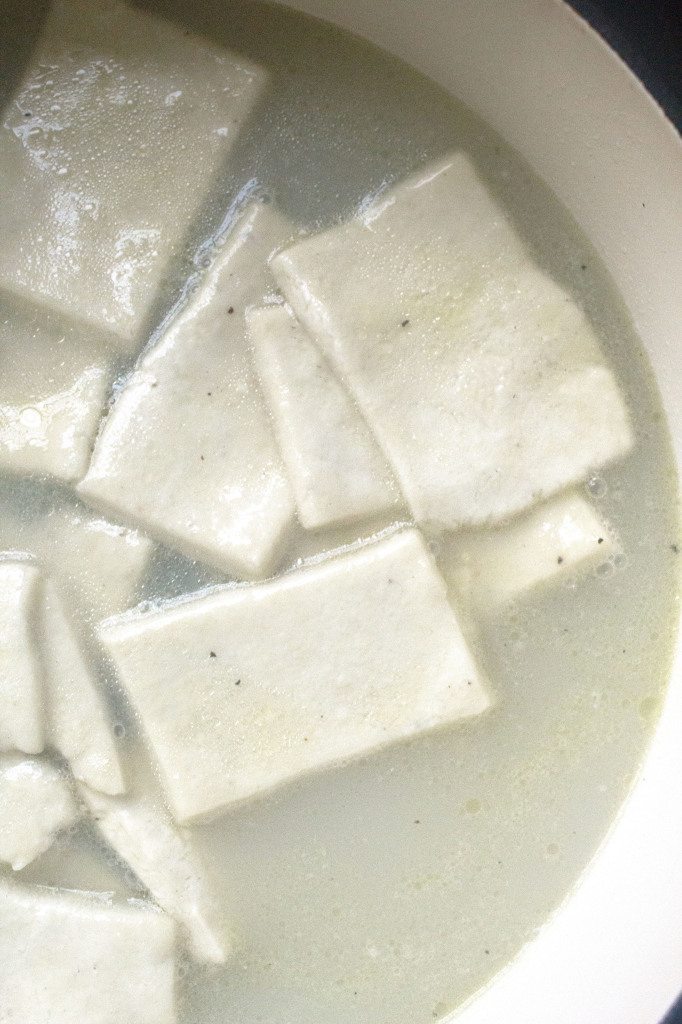 After the chicken is thoroughly cooked, remove the chicken, vegetables, and bay leaves from the pot, reserving the broth. Place chicken aside to cool and discard all the remaining vegetables, etc. You can strain the broth through a sieve into another pot, if you’d like to get rid of the film and small vegetable pieces. Bring the broth back up to a boil and gently drop the dumplings, one at a time, into the hot broth. Find the “holes” in the broth to drop them into. They should sink to the bottom and then slowly pop back up to the surface. It is important that you don’t stir the dumplings. After you’ve finished dropping them in, reduce the temperature to medium-low and place a lid over the top to let them cook. Meanwhile, remove the chicken meat from the bones. You can add as much or as little chicken as you’d like. I typically use half of the chicken meat for the stew and reserve the other half for chicken salad or some other meal. I love getting two meals from one! 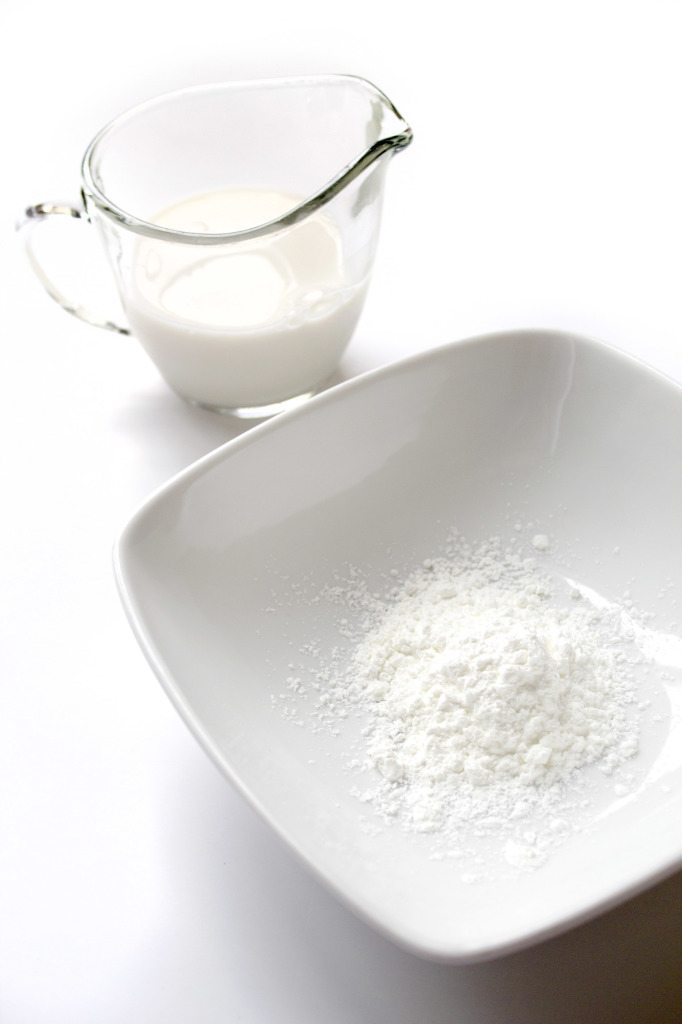 Make a slurry by combining some cornstarch or flour with milk. This adds a bit of thickness to the broth. Gently stir the slurry into the broth along with the chicken pieces. At this point I also like to add a cupful of peas, but it’s totally optional. Let everything simmer for a few more minutes, until the broth has thickened and the chicken and peas are thoroughly heated. 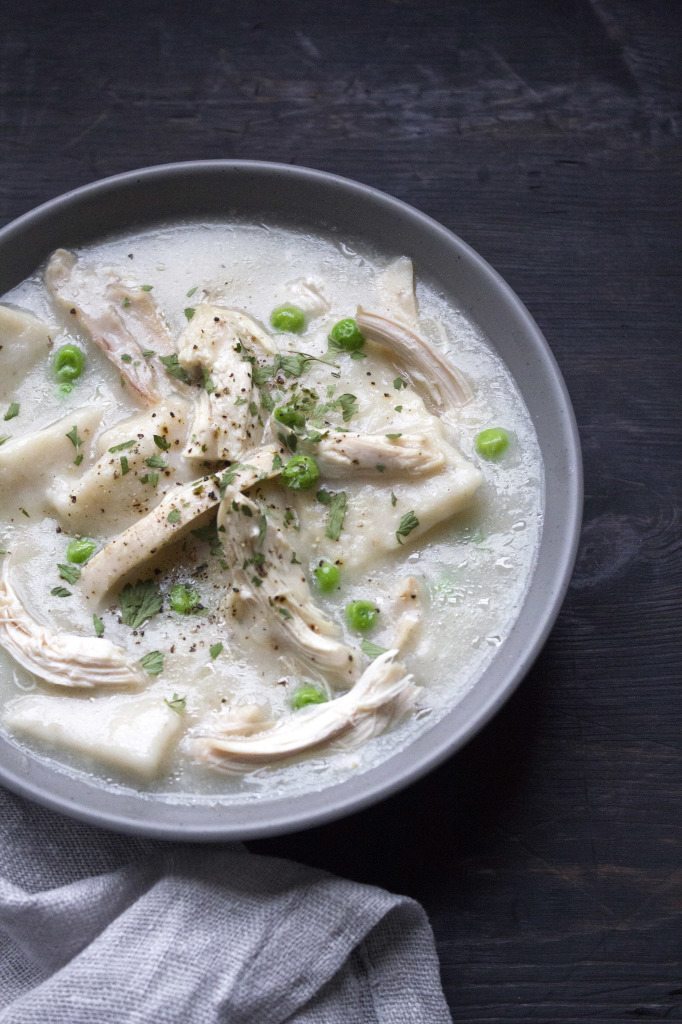 I like to top my bowl of chicken and dumplings with some freshly ground pepper and chopped parsley. Hope you enjoy it, friends!

Southern style chicken and dumplings made with a homemade chicken stock and gluten-free dumplings.

To Make The Broth:

To Make The Dumplings:

To Make The Stew:

*TIP: You can substitute the gluten free flour blend with 3 cups of regular all-purpose flour, just omit the xanthan gum.