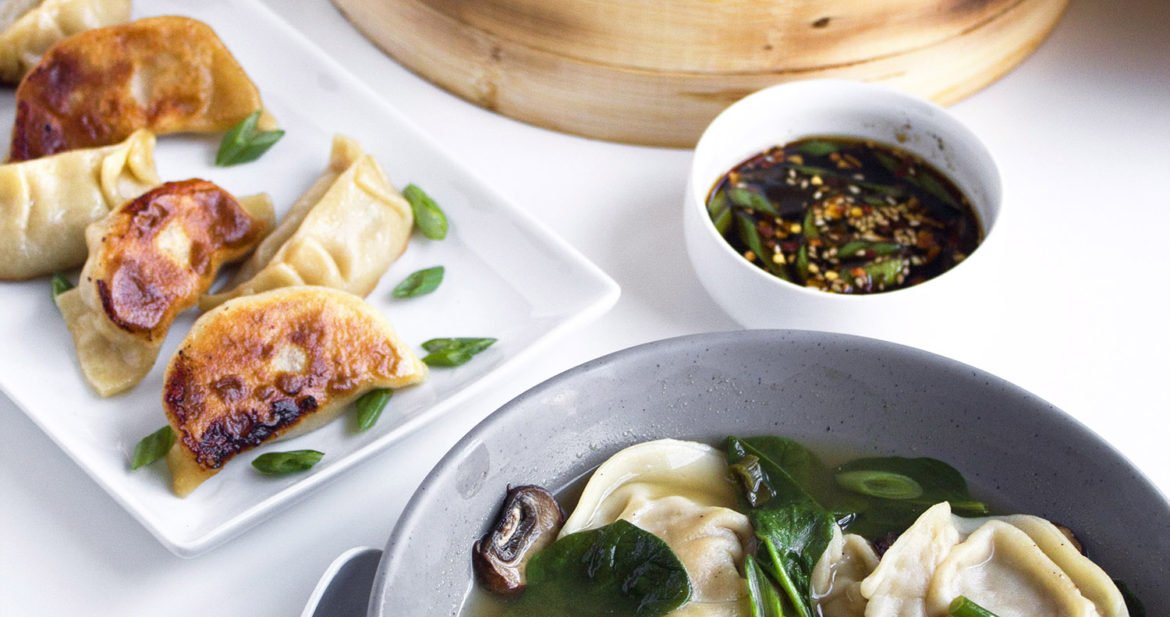 This tutorial will teach you how to make asian dumplings from scratch! 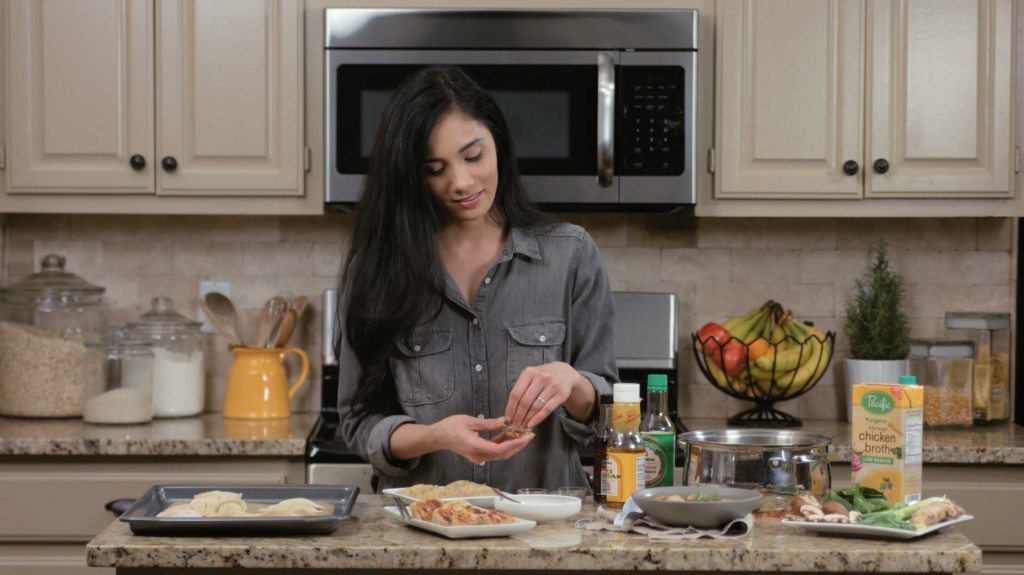 Hey, friends! I recently had the pleasure of partnering with Skillshare to create a cooking tutorial for how to make Asian-style dumplings from scratch! I’m usually very camera shy, so I’m surprised at myself for taking on such a feat! I decided to take the challenge because I knew it would give me the opportunity to work on my fear of public speaking…well, that is if you’d refer to a couple of camera men as the “public.” 😜 If you, like me, are more visual and would like to take the class, along with a plethora of other classes on cooking, design, photography, or whatever your interests may be, you can sign up for a free 30-day trial at Skillshare by clicking HERE.

If you’re coming from the SkillShare class, you can download a pdf with all of the recipes HERE. 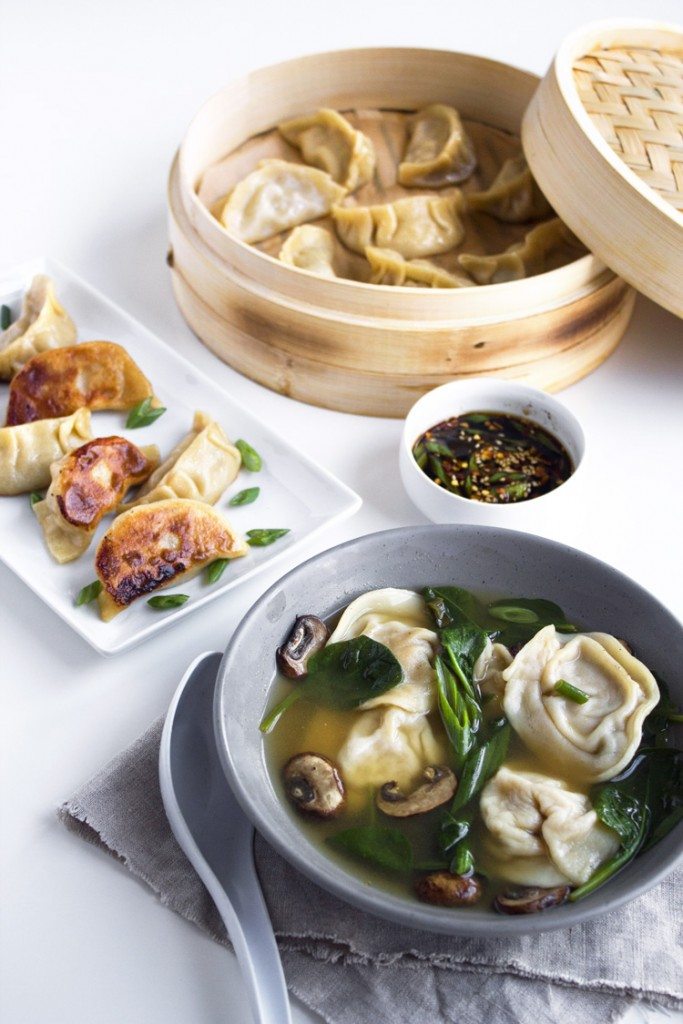 Dumplings are popular in almost every culture. Whether it’s chicken and dumplings in the southern U.S., pierogies in Eastern Europe, gnocchi in Italy, momos in Nepal, samosas in India, or gyoza in Japan, you can usually find some sort of dumpling dish in each country. They can be sweet or savory, boiled or fried, and even filled with fruit, meat, or vegetables, like samosas, or left plain, like gnocchi. Being from in Hawaii, I have a soft spot for Asian food, so I’d like to share with you my recipe for Asian style dumplings…athough I also have a delicious recipe for Chicken and Dumplings here on the blog! 😋 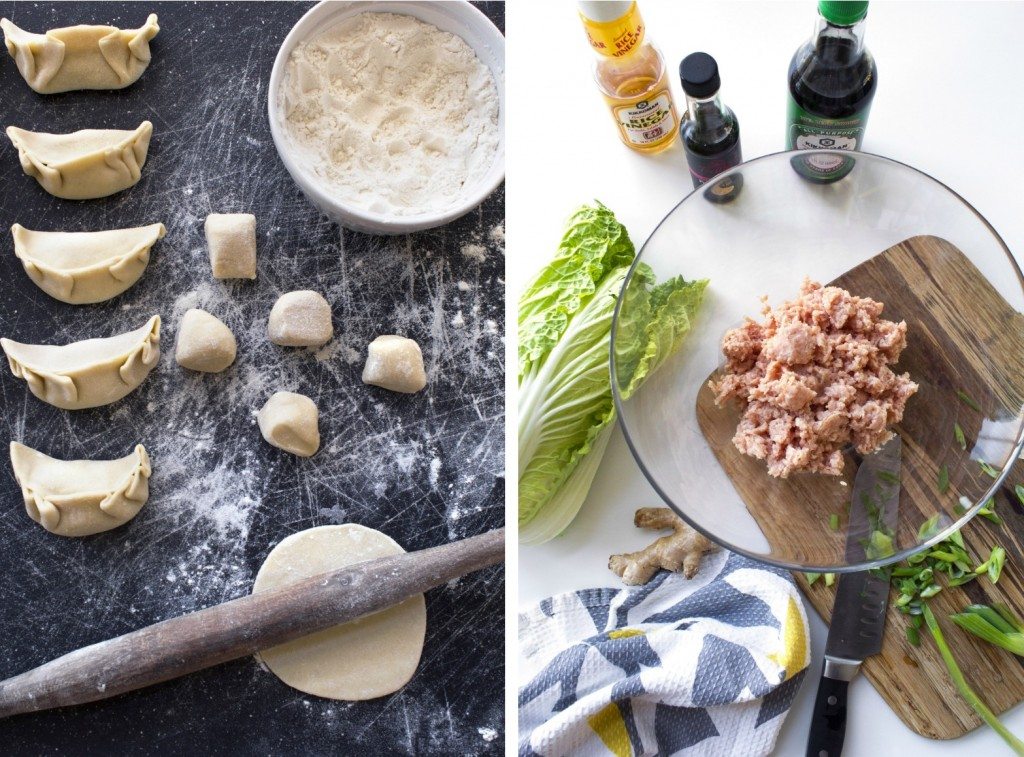 Don’t be intimidated by the thought of making dumpling wrappers from scratch. They really aren’t that hard to make and pretty inexpensive since they only contain flour, salt, and water. These dumpling wrappers are made with regular all-purpose flour, but I included a gluten-free wrapper recipe at the bottom of the post! If you’re in a pinch for time, you can also purchase round dumpling wrappers at any Asian market.

There are really so many options for the filling and most recipes usually call for a meat of choice and a blend of vegetables. I chose a very simple, yet delicious meat and cabbage filling for these dumplings, but feel free to experiment with the filling and substitute different veggies for the ones I have chosen, if you feel inclined.

DUMPLING WRAPPERS: (I included a gluten-free wrapper recipe at the end of the post!)

How to Roll The Dumplings

There are many different folding techniques for dumplings, from easy to complex. You can find a plethora of ideas online, but the good thing is that however you choose to fold them, they all taste the same! 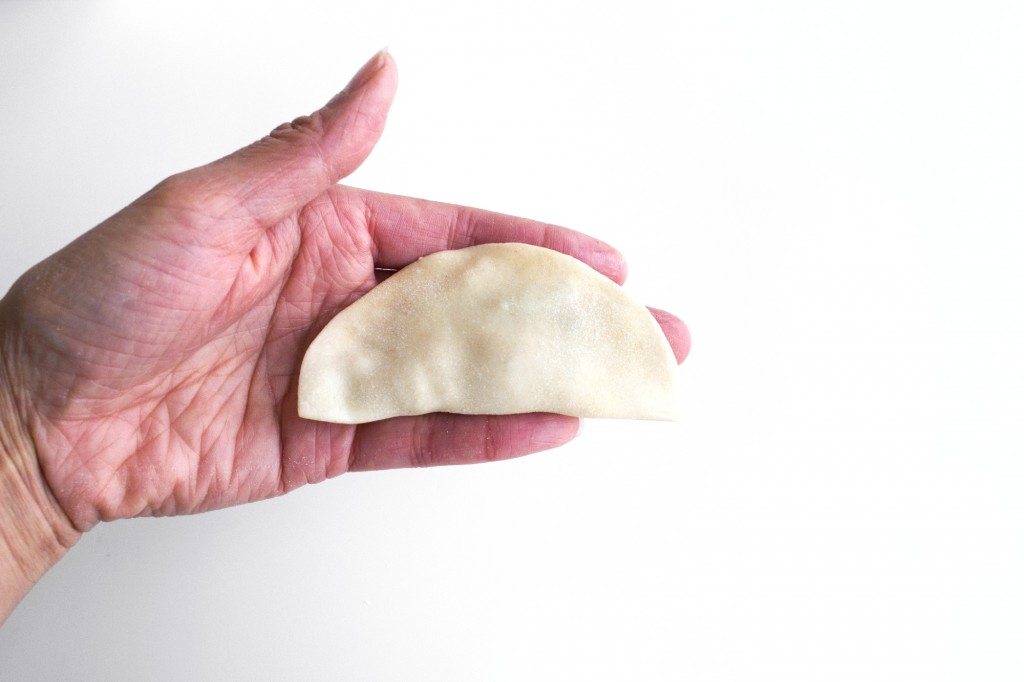 This technique is by far the easiest. Place a small spoonful of filling onto the center of your wrapper, just don’t add too much or the wrapper will be hard to seal. Use your finger to lightly coat the edge of the wrapper with water. Bring one side up over the filling to make a half circle. Pinch edges together and squeeze out any excess air.  Place folded dumplings onto a lightly flour-dusted plate or tray and cover with a clean kitchen towel or plastic wrap while you fold the others. 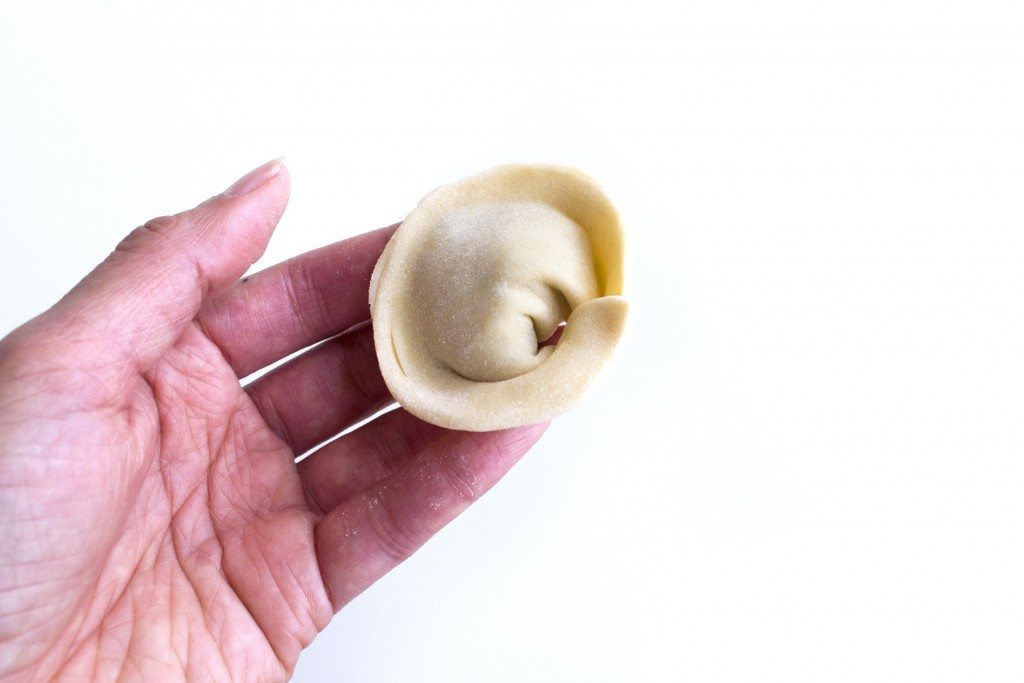 These are called “Big Hug” dumplings because when folded they look like two arms wrapping around to hug something. I like to make these for the dumpling soup (included below.) To fold, start off with the half circle shaped dumpling from above. Bring the two corners of the half circle up and around the flat edge of the dumpling. Pinch the two “arms” together, like it’s hugging something. Place finished dumplings on a flour dusted tray and cover with plastic wrap or towel while you continue to fold the rest. 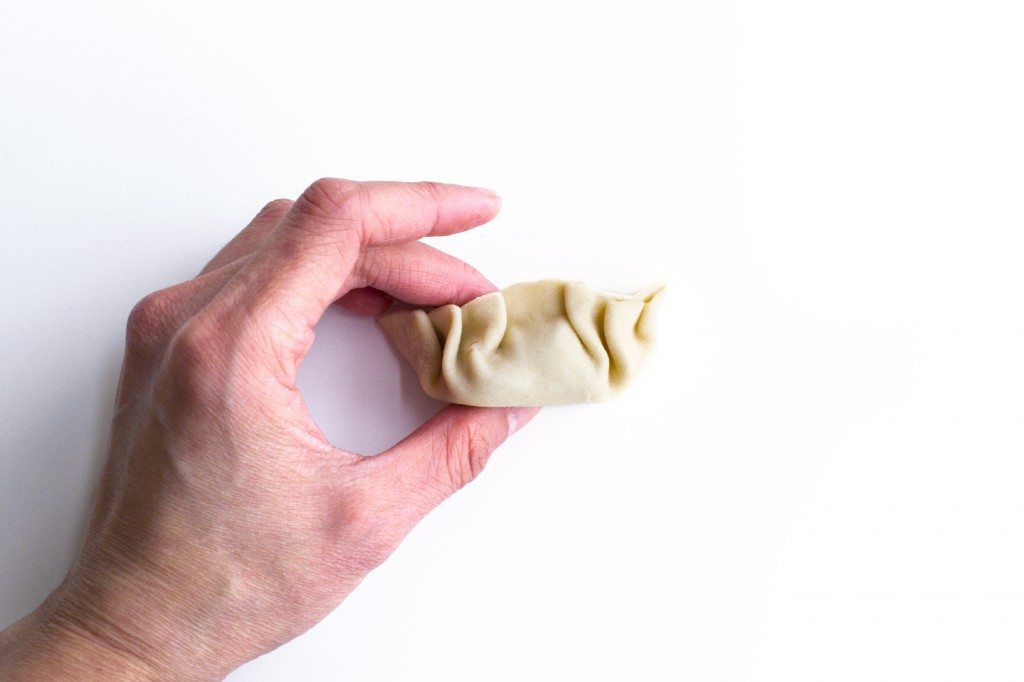 There are so many ways to pleat the dumpling that really none of them are wrong. For this pleating method, place a small spoonful of filling onto the middle of your wrapper. Lightly wet the edges of the circle with water. Bring two opposite sides of the circle up, like a taco, and pinch to seal the middle. Starting on the left side of the dumpling, make a little fold or pleat towards the pinched center with the front side of the dumpling wrapper, leaving the back side of the wrapper flat. Pinch the pleat to seal and continue to make 1 or two more pleats on that side. On the opposite side, make 2-3 symmetrical pleats towards the center.  Dumpling should naturally curve around in a half moon shape. Place finished dumplings on a flour dusted platter and cover with plastic wrap or a towel while you finish folding the rest.

How to Cook The Dumplings

After you roll out your dumplings, there are several different ways to cook them—Steam, pan-fry, or boil. I’ve included the instructions for these three methods below. 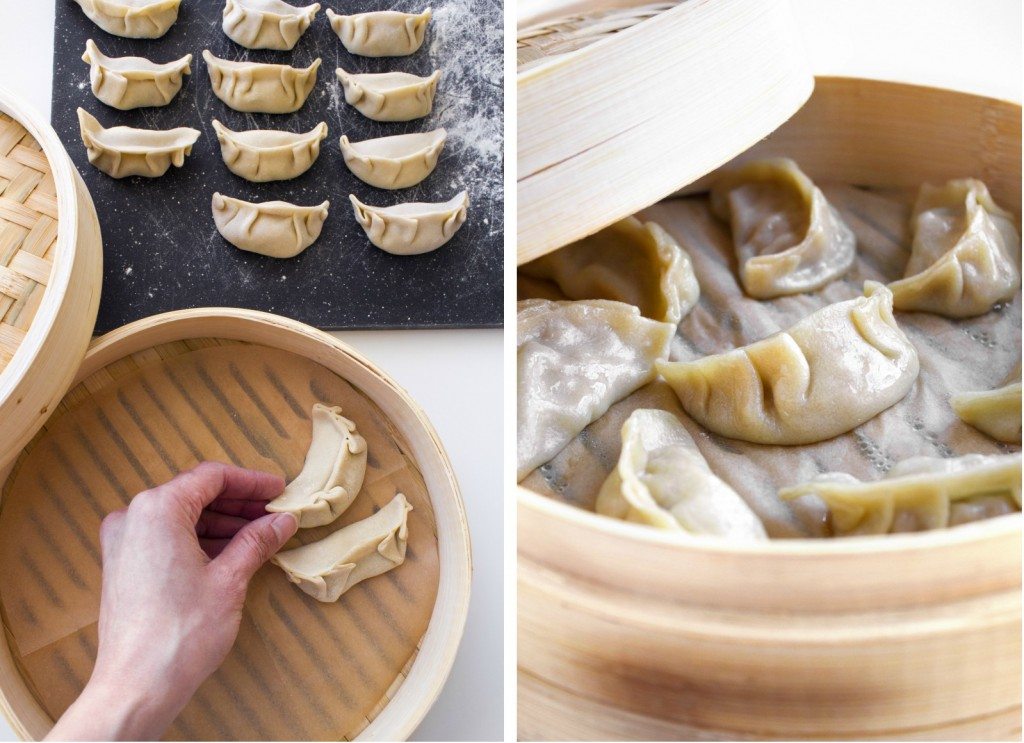 You can easily steam dumplings in a Bamboo Steamer

. The important thing is to line the steamer with a piece of parchment paper or cabbage leaf. You can also use non-stick spray if you don’t have the other items. To easily cut a circle to size, start with a piece of parchment paper the width of your steamer. Fold it horizontally and then vertically. Place the corner of the folded parchment in the center of the circle and then cut around the steamer basket, about 1/4 to 1/2-inch inward from the outer edge. Open the parchment up and it should easily fit into the steamer. Use the photos above as a guide.

Place your dumplings onto the parchment in the steamer leaving a little space between each dumpling so they don’t stick. Place steamer over a pan, wok, or pot of boiling water and cook with a rapid steam for 6-8 minutes, or until center is no longer pink and wrappers are puffed and slightly translucent. These are delicious served with the dipping sauce included below!

Pan-fry for Potstickers along with an easy dipping sauce 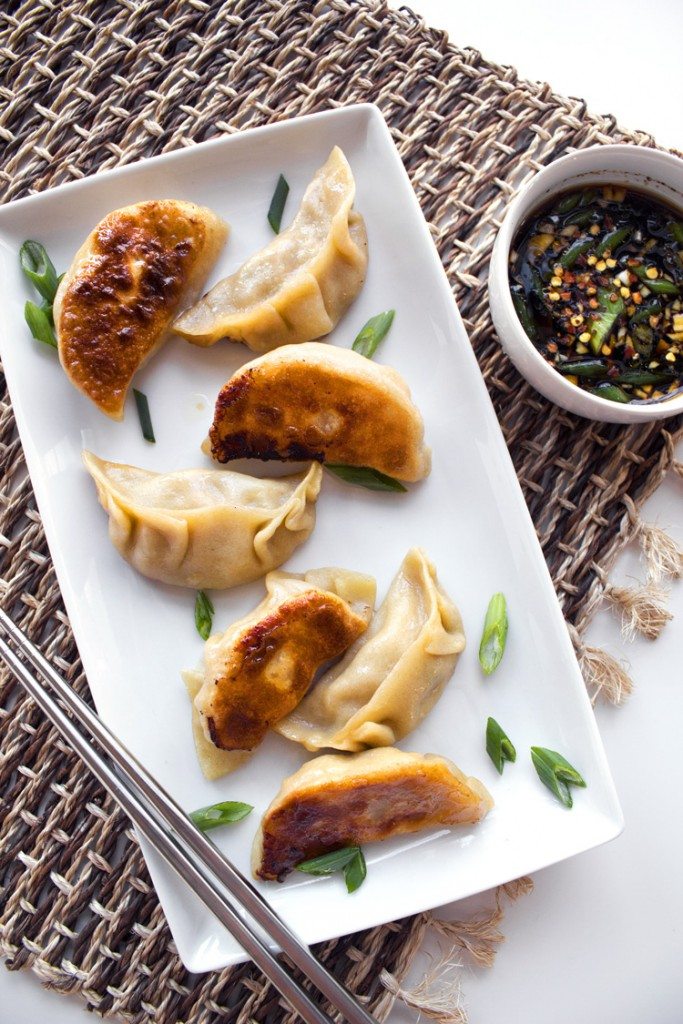 Place 1-2 tablespoons of oil into a large pan (I suggest non-stick or well seasoned cast iron skillet) and place over medium heat. Once pan is hot, place into the pan leaving a small space between each one so they don’t stick together. Cook for about a minute or so until the bottom turns a golden brown. Place 4-5 tablespoons of water into the hot pan and immediately cover with a lid. Reduce heat to medium-low and let steam for 5-8 minutes, or until center is no longer pink and water has evaporated from the pan. Serve potstickers with the easy dipping sauce included below!

DIRECTIONS: Mix all of the dipping sauce ingredients together in a small bowl. Taste and adjust seasonings as needed. Serve along side of potstickers or steamed dumplings. Download a pdf with all of the recipes HERE.

Boiling along with an easy broth for soup 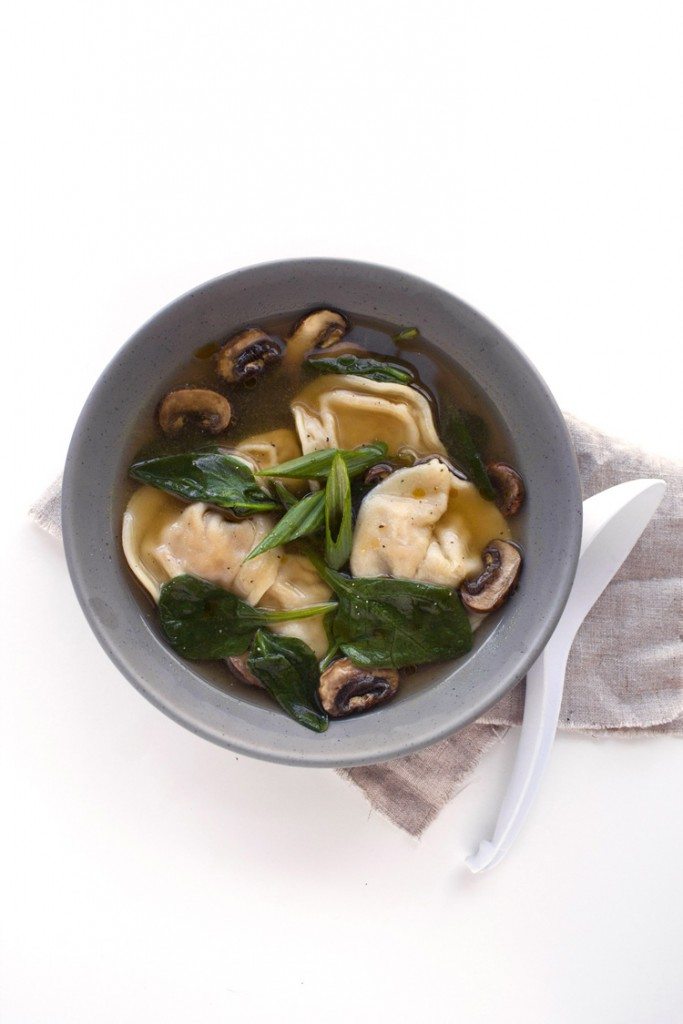 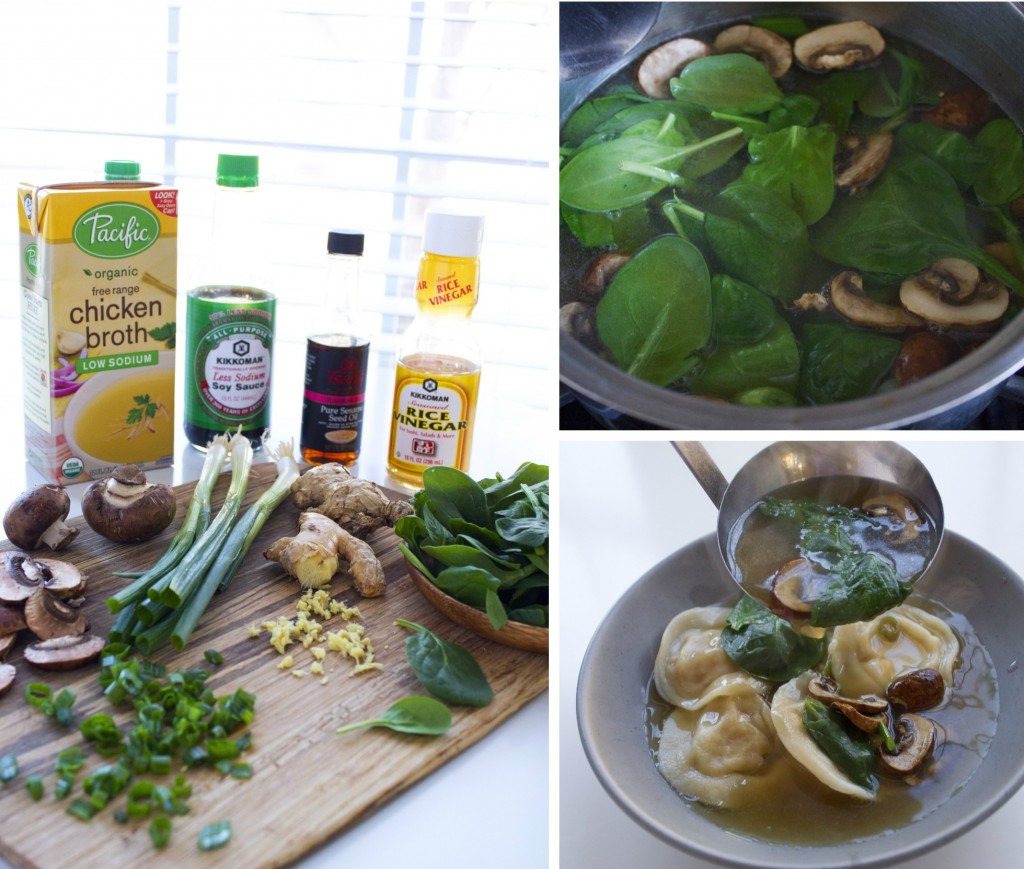 Place a large pot of water on the stove and bring to a boil. Drop dumplings, one at a time, carefully into the boiling water. The dumplings will sink to the bottom and begin to float as they cook. Once they begin floating, cook for a few more minutes before removing, about 8-10 minutes total. Dumpling should be tender and center no longer pink. Remove cooked dumplings to a bowl or plate and repeat the cooking process with remaining dumplings.

Directions: Into a large pot, combine broth, water, soy sauce, rice vinegar, sesame oil, a pinch of salt and pepper, green onions, and ginger. Bring to a boil and then reduce heat to a simmer. Add mushrooms and simmer for 4-5 minutes. Add baby spinach and continue to cook just until wilted. Adjust seasonings to taste and then Pour broth into the bowl over boiled dumplings. Makes enough broth for 3-4 bowls of soup. Download a pdf with all of the recipes HERE. 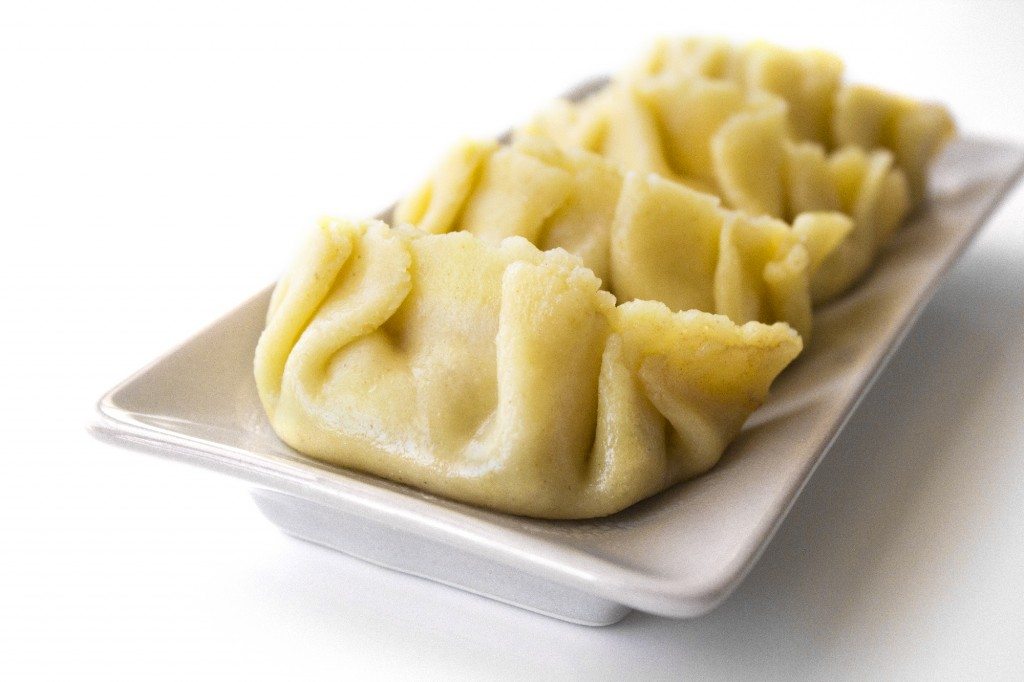 I had some inquiries about gluten-free wrappers, so I spent some time in the kitchen creating what I think is a very delicious and similar recipe to those made with all-purpose flour! I didn’t try any other flour substitutions besides these, so if you happen to try any others with success, please let me know!

Directions: Combine flours, xanthan gum, and pinch of salt in large bowl. Mix in eggs and then add 1 tablespoon of water at a time, mixing in between, just until dough comes together. If dough is still crumbly, instead of adding more tablespoons of water, just wet your hands and mix the dough by hand. This adds just a little moisture without making it too sticky. Take dough out and knead it for a few minutes on a lightly flour-dusted surface (I used more of the 1 to 1 baking flour.)

When dough is smooth, use a knife to divide dough in half. Take one of the halves and roll into a 1 to 2-inch thick log (cover the other piece up with plastic wrap so it doesn’t dry out.) Cut log down the center and line each half up beside one another and cut down the center again. You should have 4 equal halves. Line the 4 halves up and divide down the center and then divide each half in half. You should have 16 equal pieces of dough. Repeat process with the other half of dough from earlier. Cover all of the dough with plastic wrap or a kitchen towel while you roll out each wrapper. Should make about 32 wrappers.

You can roll, fold, and cook these using the tutorials above, just keep in mind that because these wrappers don’t contain gluten, they are a little more fragile and not as elastic as those made with regular flour. Handle the rolled dumplings carefully to ensure they don’t fall apart. Download a pdf with all of the recipes HERE.